Misadventures on a Five Day Transit Visa in a Totalitarian Regime 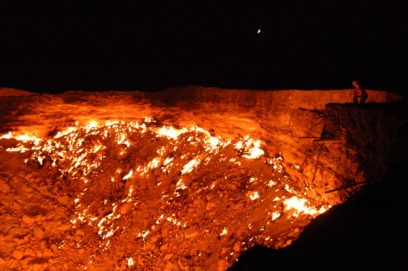 Turkmenistan is a living, breathing 1984.

It’s home to one of the most oppressive regimes in the world, with a cult of personality that would turn the head of even Kim Jong-Il. But unlike North Korea, don’t expect poverty from this gas rich nation. Despite the brutal regime, 21st century Turkmenistan is one of the fastest growing economies in the world and provides a surprisingly decent standard of living to its citizens with free petrol, gas and electricity for all – albeit those in the capital of Ashgabat have a very different existence to those outside of it.

And this is where Turkmenistan becomes truly perplexing for the visitor. Despite all the horrors of a planned economy, a police state and the third poorest human rights record in the world, the Turkmen you meet seem… genuinely happy?

You’ll be left wondering if maybe, just maybe, a blue sky, free electricity and a simple, predictable job would make you happier than all of your democratic freedom. And that’s a scary thought.

Travelling in Turkmenistan gives the impression of being on another planet. It’s off the radar of most travellers due to the difficult visa rules and I presume having “stan” in the name. But it’s one of the most extraordinary countries I’ve ever travelled through.

This series of blog posts describes how to travel independently from Ashgabat to a man made disaster turned world wonder: the perpetually ablaze, Darvaza gas crater. All on a five day transit visa!