Let’s get this out of the way up front: I’m a very secure atheist. And not from lack of trying – I’ve done my time in Sunday school, spent many a morning in church and drifted off through my share of sermons – all to no avail. So, you can imagine the surprise when I told my friends and family that I was going on a pilgrimage to Rome. Or as I ingeniously put it “a secular pilgrimage”.

Well, despite my best intentions there was nothing secular about it! Within the first day I was donating money to the church and attending a pilgrim’s mass in the spectacular Assisi Basilica. Most of my fellow pilgrims (or pelligrini in Italian) were completing the route for deeply spiritual reasons, and I could never quite shake the feeling that I was a spy behind enemy lines. But that was all part of the cultural adventure in exploring Catholicism, the history and mythology of St Francis of Assisi. 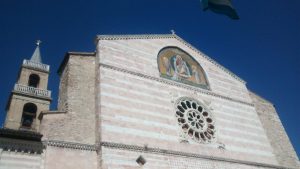 The Cathedral in Foligno.

His more magical deeds aside, St Francis was an influential figure, a lover of nature, who turned the focus of Catholicism back towards the plight of the poor. For an atheist with a strong interest in bettering the human condition, there is something to learn from the life of St Francis.

By following in his footsteps you go deep into the history while traversing the undulating Italian landscape. The pilgrimage takes you across rolling farmlands to medieval hill top towns, hiking through mountainous national parks, following meandering rivers through sadly emptying villages, and passing through modern urban sprawl until you reach your final reward: the magnificent Rome and Vatican City itself.

The below aims to be a full account of the experience to act as a guide for future pilgrims, whether their reasons be spiritual or otherwise. 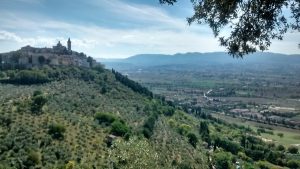 Approaching the medieval town of Trevi on the hilltop.

All Routes Lead to Rome

Unfortunately Francis didn’t leave a record of his 13th century route plan to get to Rome, so there isn’t complete agreement over the official route. Guidebooks tend to give different variants, depending on what the author considered the most scenic. There are also a few different start and end points of the trek all of which could still be considered St Francis’ Way. 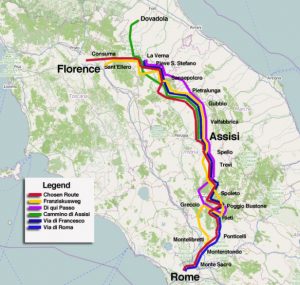 The longest possible trek would be to go from Florence to Rome over 28 walking days. But as there is very little to link St Francis to Florence (no miracles in the area) the only reason for doing this itinerary would be to top and tail the trek with two famous cities. Which if you haven’t visited beautiful Florence, could be reason enough in itself. The opening section between Florence and La Verna is also said to be the most challenging, passing through mountainous national parks, and is no doubt very scenic.

However, most traditional descriptions of the pilgrimage, focusing on locales relevant to St Francis, would give the longest possible itinerary of 22 days, starting from La Verna and ending in Rome. Most pilgrims tend to split the route in two: either tackling La Verna to Assisi (9 days), or Assisi to Rome (13 days). 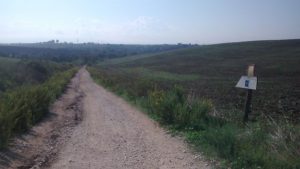 This road will eventually lead to Rome!

Another viable option is 17 days from La Verna to Rieti. It’s true that after Rieti there aren’t any more sites relevant to the life of St Francis as the route merges with “Via di Roma”, and between Rieti and Rome I didn’t come across any other pilgrims, which was a bit lonely. However, by ending your pilgrimage in Rieti, you’d miss out on the grand finale of Vatican City and receiving your certificate of completion (testimonium) from St Peter’s Basilica itself.

The itinerary described in this series is the 13 day pilgrimage from Assisi to Rome. One day I’ll return to complete the La Verna-Assisi leg of the route, just in case my place in heaven is not quite confirmed…