So, how did an able bodied adventurer, a lame vet, a pregnant woman and an overly protective husband get on with the ascent of Scafell Pike?

After this the next flat bit is the summit.

Well, despite the previous evening spent beering and dining in a local pub, we managed to make an early start to get to the trail head full of beans for around 10am. Sun block and walking boots on, we were ready to go!

The trail led out of the car park past the toilet cubicles (the low point of the scenery). After spending 20 minutes admiring lambs in a field, we followed the signs for Scafell Pike away from the lambs and a glittering lake, up an obvious path following the river. So far so good, we crossed a bridge to continue up stream and passed through a gate into a field. And thus ended the tame stage of the hike: here is where the ascent really begins. 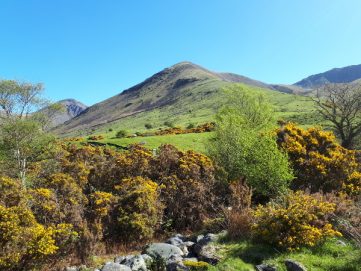 It Was At This Point That It Became Clear Jo Couldn’t Continue.

We had long discussed that Jo would only be able to join us for the foothills, and being sensible parents to be, Jo and Thomas made the decision to descend. They spent a lovely afternoon by the lake eating ice-cream… leaving Pip and I to slog it to the top.

At the end of the field, we carefully hopped between rocks across the river for the path to become a gruelling stone stair case, seeming to wind on for eternity. The day was perfect in the sense of picturesque blue skies, but unfortunately that also meant that the sun was able to beat hikers (including us) into submission. 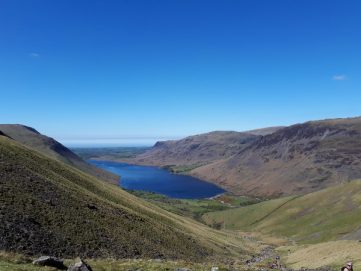 The lovely blue sky… that almost caused us to expire with the heat.

That Is To Say Almost Into Submission.

Finally, just when we thought we couldn’t go on, we made it over the crest of a hill to get our first glimpses of the imposing Pike. Seeing the amount of mountain left to conquer, we made the wise decision to immediately sit and eat lunch. 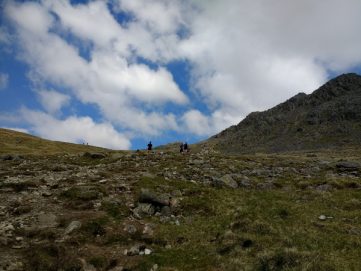 This point is where the path forks, one branch curving left round the back for a more “gentle” ascent, the other a sheer scramble straight up. Few people were attempting the scramble, which, considering the crowds of the main route, made it even more attractive, but as we were already expiring from the heat we decided to risk the crowds instead.

Thankfully, The Worst Was Behind Us (Even If We Didn’t Know It Yet).

Fuelled by lunch we ploughed on, the path now becoming stream of gravel twisting its way through rocky, boulder laden surroundings to the summit. 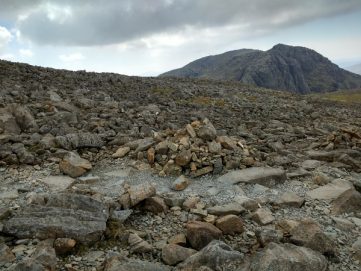 Or at least I thought it was the summit. Just when I thought the top must be just over this next ridge we were presented with… another ridge.

“This one has to be the final push!”

“OK so now it really really must be the final push!” 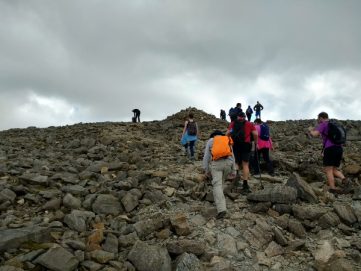 Nope, still not the final push.

After climbing yet another ridge, navigating our way through the scree and our fellow hikers coming down the mountain, we saw it!

A Squat, Square Mound In The Midst Of A Flat Plateau. 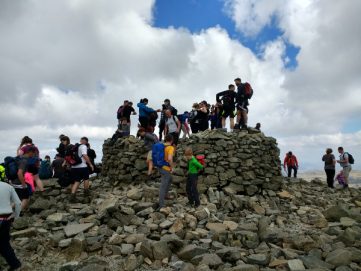 Somehow this was not what I imagined…

Was it beautiful? No. Was it the summit? Yes! And making it there was all we cared about.

Scafell Pike has a reputation for being an underwhelming summit. This is due to it being more like a plateau, than a peak. But the scenery on that final leg of the ascent was well worth all the toil even if the final view was a bit of a non-event. After all, climbing up a mountain is all about the journey not the destination (which tends to be where you started from). 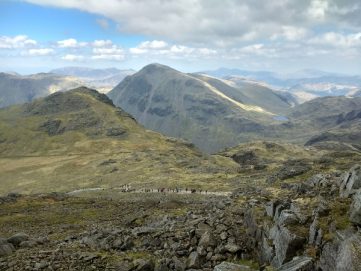 A much more inspiring view 30 minutes from the summit.

Unlike Snowdon, there are no facilities (or train station) at the top. So if you were hoping for toilets, you’ll be even more disappointed than with the view. For an indoor comfort break, you’ll need to return to the car park.

As nature was calling, and after taking the requisite victory selfies, we slowly and steadily retraced our steps all the way down to the car park.

Our mental state and knee caps shattered, we were reunited with Jo and Thomas. To celebrate the day we indulged in some much deserved ice cream, are spent the early evening dipping our sore feet in the cool, glistening waters of the lake. A job well done! 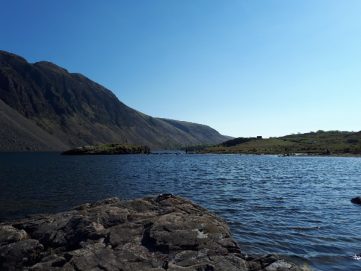