This is a tale of how three woman, two babies and a husband climbed England’s tallest mountain. 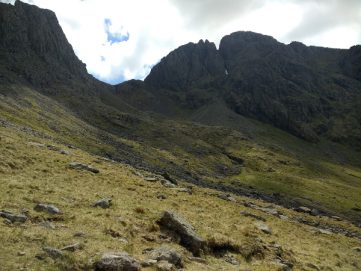 Turn back all ye who enter here.

That mountain is Scafell Pike, standing at 978m in the far west of the Lake District (yep, not the Peak District, go figure…). For those of you familiar with the Alps that may not sound particularly high, but when you consider the route starts at around 100m it is quite the scenic slog to the top.

And in the months between planning the trip and doing the trip, real life decided to up the difficulty rating. First, my friend Jo, who provided the husband for the trip, discovered she was pregnant… with twins. Brilliant news in every way, except from a ultra-light backpacking perspective!

The misfortune didn’t end there. My other friend Pip is a vet, and (luckily) not pregnant. But in the week before the trip, she was kicked by a cow in the line of veterinary duty and turned up to the weekend with a knee brace. 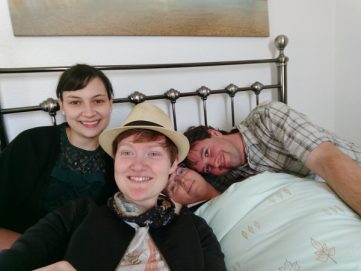 Fresh-faced innocence the day before the hike.

But my friends have grit. Despite pregnancy and cow-related injuries, there was never one hint of a suggestion that we should postpone our weekend adventure. And so one fateful May bank holiday we gathered in Ebbsfleet international station to cross the country and reach the relatively low ceiling of England.

What Is The Most Pregnant Friendly Route Up Scafell Pike?

Even before the various set backs, it was clear that we should be using the easiest possible route up Scafell Pike.

There are two main routes: one beginning in Wasdale and the other in Seathwaite. The Wasdale walk is shorter, but steeper than the Seathwaite route. We went for the Wasdale route as the internet consensus seems to be that it’s the easier route, although there doesn’t seem much in it. You can also add some extra challenge to the Wasdale walk by taking on an optional scrambling section, forking off the main trail as a tough, vertical short cut to the summit. 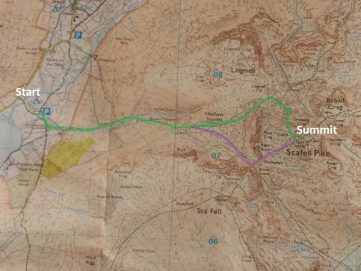 Green is the standard Wasdale route, purple the daring scramble. 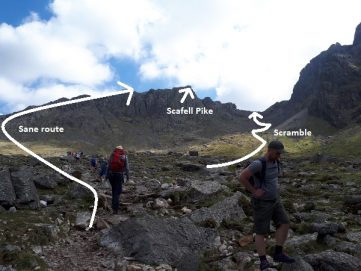 If you’re constrained to public transport, Seathwaite is the more doable option in terms of getting to the trail head. And even if you have in car, when you consider it takes an hour and a half to drive from Seathwaite to Wasdale, your route may well be decided by the location of your B&B, hotel or camp-site.

“Don’t Think This Will Be Like Snowdon”, Said The Internet Smugly.

Like any good adventurer, I poured over the advice and experiences of other hikers before starting the trip. Advice on the internet gave ominous warnings that there wasn’t a clear trail near the top, and you’d be left scanning the landscape for hidden cairns to find the way.

Well, I can confirm that as of 2018 the Wasdale route is not in any way uncharted territory. There was a very clear path the whole way up with tower like cairns every ten meters near the summit. If that wasn’t enough, there were so many people on the trail during the May bank holiday weekend, I could have just followed their voices to the top! 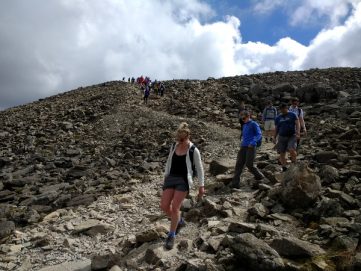 It’s not exactly lonely at the top.

That said, it’s always best to have a map. The UK’s ordnance survey maps have as ever got you covered: The English Lakes OL6 is the one you need, covering the whole area.

Getting There When You’re a Londoner Without a Car.

I’m a Londoner; public transport is how I get to almost every destination in my life.

Unfortunately, Scafell Pike is not one of those destinations. 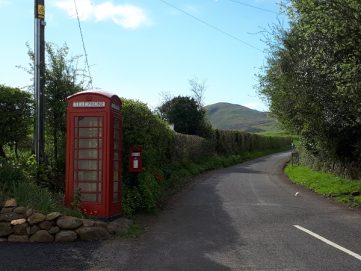 A post and telephone box – the cutting edge of Cumbria’s infrastructure.

For the Wasdale route, you can take a train from London to the nearby-ish town of Seascale. From Seascale there is one minibus that departs only on Saturdays (from March to September) at 10:10am to take hikers to Wasdale and pick them up again at 5:10pm to take them back to Seascale (a bit tight timing wise).

It’s also worth noting that there seems to be only one accommodation option in Seascale – Calder House Hotel, which isn’t exactly backpacker cheap. All in all, not ideal.

Your accommodation options are more flexible here: you could stay in the campsite next to the trailhead or there is a hotel in Seatoller, and several options in Keswick and Penrith.

Or in my case, friends from outside London who have cars! If you at least have a driving license (I admit I don’t have one of these either), a more convenient plan B would be to hire a car. I believe this is possible from Penrith station.

If you do have a car, rest assured the National Trust runs a car park at both trail heads. Apparently it used to be free back in the day, but that is no longer the case. In the car park, there are uncivilised toilets and a little cafe – ice cream anyone? 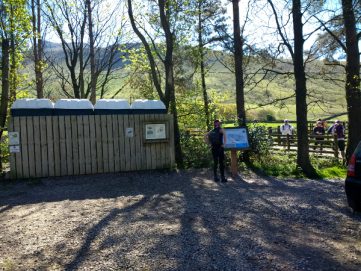 The car park toilets: an inglorious way to mark the start of the route.

It’s also worth noting that we turned up after 10am on a bank holiday weekend – possibly the busiest weekend in the year for Scafell Pike – and were able to find a space. In that sense it’s not like Snowdon, where the car park is full up at dawn.

If you do manage to bring a car with you, you have far more freedom with accommodation choices, B&Bs and hotels being rather plentiful across the countryside.

However, Budget Accommodation Options Are A Bit Thin On The Ground.

We solved this problem by staying in an AirBnB in Lamplugh – the type were you type in a code to get the key to the door and then have the place all to yourself. It was a bit of an old lady house decorated in fifty shades of beige, but the kitchen and cosy living room were redeeming features. And more to the point, at £40 per night split between four of us it’s elevated to a budget traveller’s dream.

One additional piece of advice: check Google’s estimated drive time from your prospective hotel to the trail head. The distances are small, but driving on tiny, meandering country roads takes longer than you expect. Our AirBnB was a 40 minute drive from Wasdale – just on the border of acceptable.

Now we’ve slept and finally made our way to the trail head, it’s time to see if our wayward adventurers make it to the summit.  Find out in part 2 coming next week!