You’ve finally made it to the park gate, paid your fees and registered in their big book of trekkers. It’s time to take your first steps in Mount Kenya national park.

Your first day of the trek will be spent climbing up a half finished road (at least half finished in 2015) through the forest. There are some steep bits, but otherwise it’s relatively gentle climbing. Watch out for baboons. 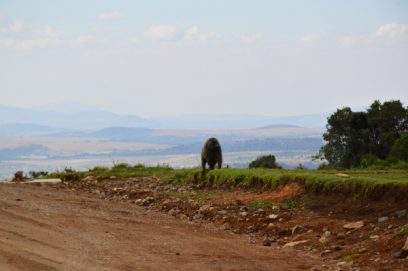 Don’t mess with this guy.

Route notes: You’re following a road. You can leave the map in your bag for this stage.

Water: No streams to refill until you get to Old Moses Hut, but the stage is so short it’s not a problem.

Hut/Camping: The road will lead you past a camp site (a grassy plateau with a stream) and ends 50m further at Old Moses Hut where you can find dormitory accommodation. 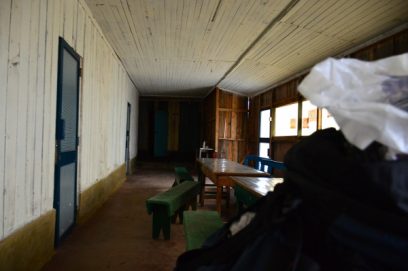 The communal area in Old Moses Hut. Sparse, but still better than a tent.

This is a long day spent steadily going uphill. You’ll pass through bogs, valleys and tundra until you forget that you’re in Africa and start to hallucinate that you’re exploring the moors of Scotland (a strange symptom of altitude sickness experienced only on Mount Kenya). 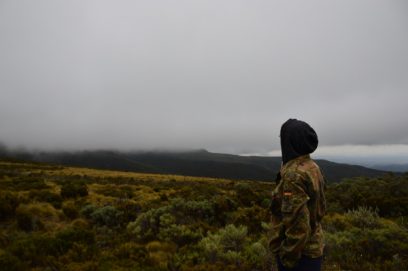 Route notes: I found the path clear throughout, with a sign signalling the fork to Shipton’s Camp and Liki North to avoid any confusion. There is a boggy section which seems made up of lots of intertwining paths, however it was pretty clear where the main path was heading throughout. If in doubt, take a compass bearing.

Water: The path crosses Liki North River half way through and follows Liki River for the final third, so there are possibilities if you run out of water.

Hut/Camping: There is a free campsite with a stream on the valley floor below the main hut. Unfortunately the toilet is located up the hill next to the private camp-site, so factor in a mini-trek every time nature calls. The private campsite is located on the plateau with the hut that provides dormitory accommodation.

If you have a tent and fancy breaking up the second stage into two days, you can take a detour to the remote, wild and beautiful Liki North. We didn’t see another person the whole day, which is exactly the kind of solitude I look for in the mountains.

Route notes: The day starts the same as the non-tent version, but of course you take the sign posted fork to Liki North rather than Shipton’s Camp. The path is clear for most of the way when it suddenly disappears just as you turn into a valley. Head towards the white wooden post on the valley floor. From there, you’ll see another white post on top of the opposite valley wall – head to that (there’ll probably also be some muddy footprints to show you the way). From the post, you’ll have a magnificent view of Liki North Valley, but still no obvious path. Look to your left, up towards the base of the valley and you’ll spot the tiny Liki North Hut in the distance. Never mind the lack of path, make your way to that hut! 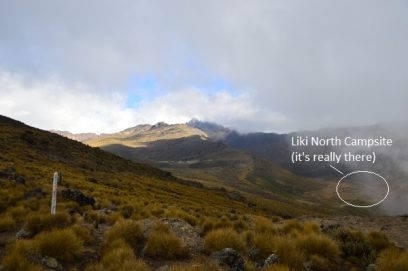 The post inadequately marking the way to Liki North.

Water: I can’t remember any water stops along the way, but as it’s a short day it’s not really a problem.

Hut/Camping: Liki North Hut is tiny, dilapidated and populated by the local wildlife. You’re only option is to camp in this serene location that seems untouched by human kind for decades – well, that is except for the useful picnic table KWS have recently set up. There’s a stream nearby for water. No, there aren’t any toilets. 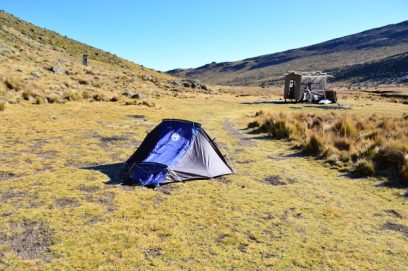 Liki North camp-site. Actually the small shed on the left might have once been a toilet – I decided against investigating.

Time to rejoin the main route. After a steep climb up the side of Liki North valley, the rest of the day is pretty gentle heading to the base of Makinder’s valley along the Liki river. When you finally make it to Shipton’s Camp, you’ll be greeted by an imposing view of the three peaks of Mount Kenya. 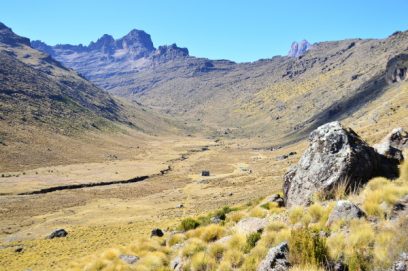 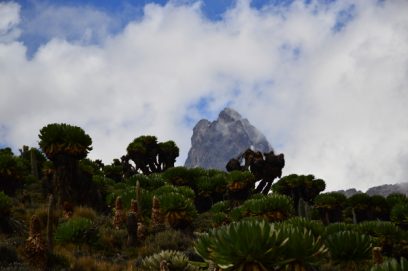 Route Notes: In contrast to the non-existant path in to the Liki North Valley, the path out is completely clear starting right from the hut. Thank the trekking gods!

Water: If desperate, you could fill up from the Liki river that runs beside the path in Mackinder’s valley, but as this is a short stage that seems unnecessary.

Hut/Camping: See notes on Shipton’s camp in the day 2 description.

You could push right on to Lenana at this point, but it’s wise to spend a day acclimatising by undertaking the summit circuit path (especially if you didn’t get the chance to acclimatise at Liki North) – a magnificent if gruelling path that circles the three peaks. 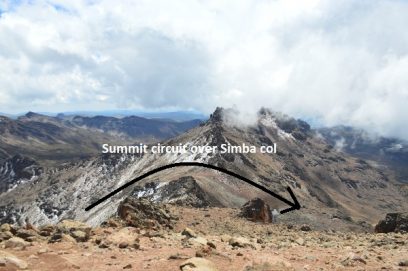 The summit circuit path up scree slopes over Simba col.

Route notes: I didn’t complete the circuit myself (and instead had a thumping headache on the summit day), so you’re on your own for this one. From the parts I saw of the route, it didn’t seem particularly clear and is very much a matter of running up and down scree slopes. But hey, it’s all for acclimatisation.

Water: The summit circuit passes by the Austrian Hut, where you can get both water and dormitory accommodation at 4,790m.

Hut/Camping: It’s a circuit, so you’ll end up back at Shipton’s camp. Otherwise you could kip in the Austrian Hut (on the other-side of Lenana). 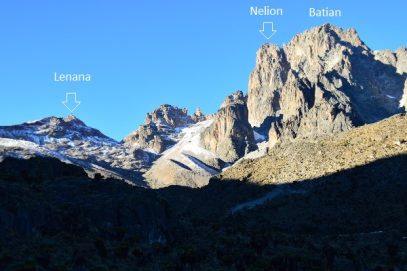 The three summits as viewed from Shipton’s camp on a frosty morning. 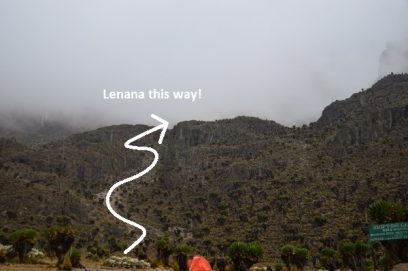 The ominously steep route from the back of Shipton’s camp.

Prepare yourself: Trekking to the summit of Lenana is a brutal, ankle twisting slog. It’ll test your physical and mental strength to your limits as you dig in deep within yourself to keep on moving up the gravelly slopes even though you’re convinced the top is somehow getting further away. This is your final, epically hard test to conquer Mount Kenya. 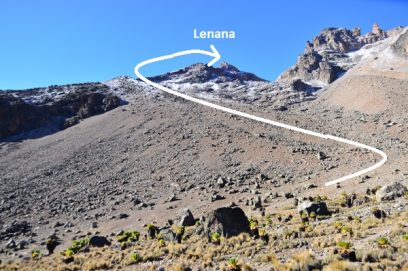 Route notes: You may have spotted that near vertical dirt track heading out the back of Shipton’s camp? Well, that is the start of the route. Once you’ve made it up there, you’ll find the base of a colossal scree slope, the peaks, temptingly visible yet so far away, at the top. After a couple of hours spent striding up and slipping down in the scree, you’ll eventually make it to the top of the ridge and a plateau with spectacular views across the range. Follow the footprints (there are many) past the mountain pool of Harris Tarn onwards to the final scramble up Lenana to bathe yourself in mountain glory.

Hut/Camping: Back at Shipton’s camp. 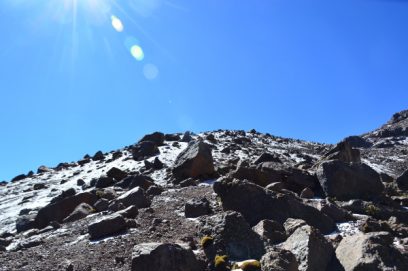 It looks like you’re near the top! You’re not. 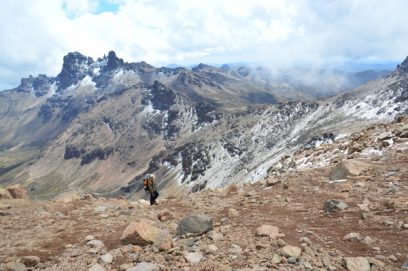 Finally, conquering the scree slop to make it onto the summit ridge. 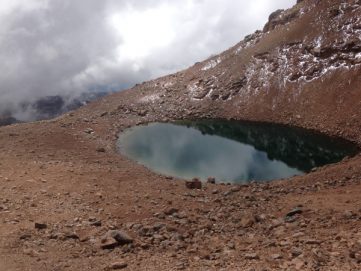 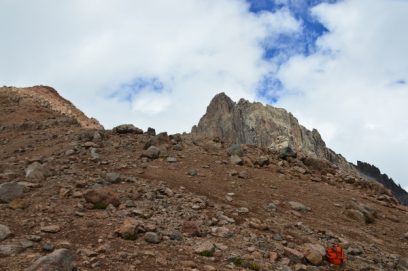 The final scramble to the top.

It’s quite comforting to know that wherever you are on Mount Kenya, it’s only a day’s march to get back to civilisation. Triumphantly retrace your steps following the main route back (I’d avoid the Liki North option due to the unclear path) all the way to the park gate. Best have the number of a driver to call to pick you up from the gate, otherwise I’m sure you’ll find a way.

Leaving the park gates behind you, it feels like you’ve abruptly crossed a border back into Africa.  The cold, misty peaks of the morning will seem a distant memory compared to the dusty, bustling, ramshackle town you’ll reach by the afternoon.  They’ll be proud memories though: Mount Kenya is the toughest mountain I’ve faced so far.  Epic adventure awaits all those who climb the slopes.