How I Found Rain and Sub Zero Temperatures in Africa

Travel in Kenya conjures up images of a businessman’s safari: luxurious, colonial and expensive. Similarly, climbing mountains in the region suggests large groups of Europeans, roping in a whole village to carry up equipment in order to lay siege to a peak.

But 21st century Kenya is changing, giving new opportunities to both visitors and locals. Revenue from expensive Safari park entrance fees seems to have finally trickled down for a middle class to emerge. A middle class that requires a convenient transport network between cities and cheap hotels along the way – the very same ingredients an independent traveller needs to roam free.

And there in the middle of the lush Rift Valley stands Mount Kenya – Africa’s second tallest mountain at a lofty 5,199m. And unlike Africa’s tallest mountain, Mount Kenya doesn’t require you to take a guide to climb the summit. It does however require you to battle the cold, the rain, muddy bogs, altitude sickness, slippery scree slopes and solitude to reach the top. Exactly the kind of adventure indie trekkers dream about. 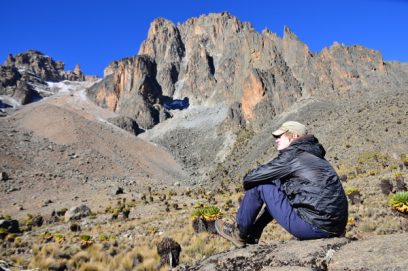 Existential reflection on the majesty of Mount Kenya.

There are three main routes to reach Lenana (or any of the peaks). The most popular of these is the Naro Moru route, mainly because it’s the shortest (possible in three days if you march, four if you acclimatise properly), although it’s said not to be the most scenic. There are huts to stay in the whole way, but it also has the craziest acclimatisation of any of the routes. 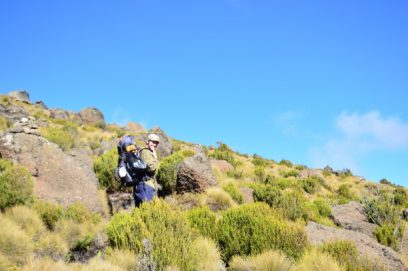 A trekker, happy they chose the Sirimon route.

A scenic alternative with a more sensible acclimatisation is the Sirimon route. There are two variations of 4-5 days, either staying in huts the whole way or spending an extra day camping on the glacial valley floor at Liki North. I brought my tent with me for the purpose of that extra night in Liki North. It was a beautiful camp-site, utterly remote with bad-ass birds unafraid of people.

The final option is the Chogoria route. Rumoured to have the most spectacular scenery of the range, it’s the least busy of the three routes as you have no choice but to camp. It takes 4-5 days depending on whether you add a day at the top for acclimatisation. 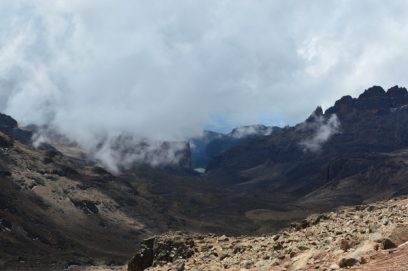 The way down the Chogoria route from the summit ridge.

Of course, you don’t have to go down the same route you came up, but this does involve dragging your gear at least most of the way up Lenana, rather than leaving it safely back at the base camp.

Without a tent, a popular option is to ascend via Sirimon and descend via Naro Moru. With a tent (and this in my mind is the ultimate Mount Kenya experience) you can ascend via Sirimon and descend via Chogoria, but this does require lugging a hefty 15kg pack (give or take a kilogram) up sheer scree slopes. You have to be exceedingly fit and with the weight I unfortunately wasn’t quite strong enough to pull off this epic route. 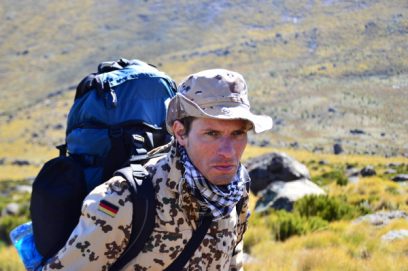 The tragic despondency of a trekker who took a tent on the Sirimon route.

In hindsight, I would have chosen to pack light and undertake the Sirimon-Naro Maro route without a tent. I’d also have spent an extra day in the comfort of Shipton’s camp to acclimatise properly before the big push to Lenana. Instead I took a tent and trekked the Sirimon round trip route, having decided I didn’t fancy the scree slopes to reach Chogoria with all my baggage.

The Sirimon route is described in detail in part 6 (coming soon!). Below is a summary table for you to compare each of the different options and find the right one for you. Note, I’ve added an optional acclimatisation day for each route just before summit day. Trust me, it’ll increase your chances of making it to the top.