After getting around Goma by foot or by helta-skelta moto-taxi, you’ll be happy to know that the park will send a jeep to collect you directly from your hotel. It seems things are never quite straight forward though, as the driver misunderstood which hotel we were staying at and arrived an hour later than planned. At this point in our Africa journey, we were used to lateness and “going with it”, so we just chilled outside the hotel until the guy turned up. 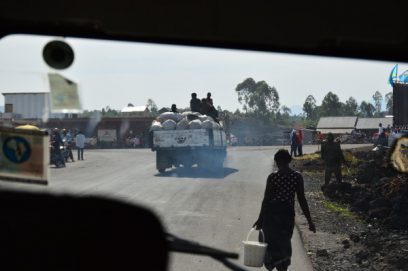 Passing through the outskirts of Goma on route to the park.

We had phoned the park the day before to confirm which hotel we were staying at (as Ellie asked us to do), but these things get a bit lost in translation over the terrible Congo phone network. I would recommend emailing the park your itinerary (including the day you expect to arrive at the border, your hotel and whether you are spending an extra day in Goma) so they have it in writing. If you spend the extra day in Goma, I would suggest swinging by their office to introduce yourselves and confirm the hotel (unfortunately for us, it was a Sunday so their office was closed).

Once all aboard the jeep, the driver will take you to their office for some final paperwork, collect your soldier with prerequisite Kalashnikov from a local barracks and then head off through dilapidated villages, check points and mining areas to reach the park and Kibati ranger station.

Here You Will Meet Your Fellow Hikers that Decided to Visit DRC (All Slightly Mad). 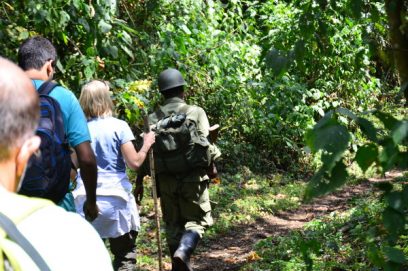 At least the first five minutes hiking were flat.

We were in a group with 9 other characters: an American lady and her son who had been many times to DRC and seemed to know the park management personally; two German guys who had been working for an NGO in Kinshasha (possibly a couple, we didn’t like to ask this being Africa); two rather large and loud American investment bankers who had brought a drone with them to film the volcano; a middle aged Spanish couple who had travelled to over 100 countries and turned out to be ridiculously fit mountain goats; and a Danish guy who was on a three month trip of a life time through Africa. Then myself a fresh-faced, limy Brit with my strong, silent, shirtless German companion. Little to say, you meet interesting tourists in Congo!

Once everyone has arrived, the park rangers will go through your kit, checking you have adequate cooking equipment etc. You’ll be assigned your porter, if you asked for one, who will carry up to 15kg for you – a very sensible limit that should be adopted by porters everywhere. Normally, I prefer to carry my own bag as a matter of pride, but as we were in a tour group that sort of rugged bravado seemed unnecessary. And considering the constant uphill, this was most definitely a good decision! 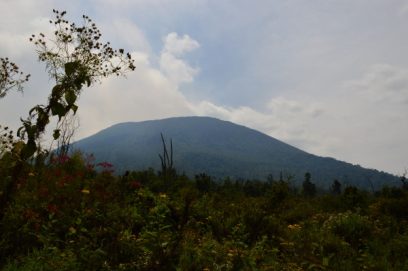 Halfway up and still a long way to go.

Over the day you will climb 1,400m to an altitude of 3,470m. The pace is set by the slowest walker, so nobody gets left behind, and takes between 4 to 6 hours. Our hike took longer than this as our slowest walker was particularly unfit, and as he himself said “I must be the first person to reach the top of this volcano who takes cholesterol pills!”. We all cheered when he finally reached the top.

The hike itself follows a clear path uphill through the forest, some parts steep, some parts less steep, but almost constantly uphill. You will take 15 minute breaks when you are told to take breaks, the guides giving you interesting talks on the park at the rest points. Personally, this experience confirmed me in the belief that I don’t really enjoy hiking in big, organised groups as I find being in a crowd ruins the primal feeling of being alone in nature. But this particular organised hike was worth it for what we’d find at the top.

The Last Section is a Particularly Gruelling Scramble to the Rim of the Volcano.

Finally at the top, cold, sweaty and exhausted, you’ll gaze down into the mouth of the mountain and be confronted with a molten liquid mass of bubbling, boiling lava. Nature at it’s most powerful, destructive and beautiful. 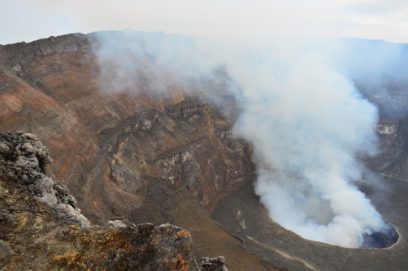 As you creep closer to the edge, the guides will tell you the story of a tourist who fell in and was collected in pieces in a body bag. You’ll quickly re-adjust your proximity to the edge.

Twenty meters from the rim, you’ll be allocated a little wooden cabin to sleep in. It’s rough, but preferable to a tent. As the sun sets, the air chills and you’re thankful that you brought all those layers despite your pre-conceived notions that Africa is always hot. The evening is spent cooking, gazing in wonder at the spectacular volcano and looking back towards Goma, the city lights twinkling in the distance. 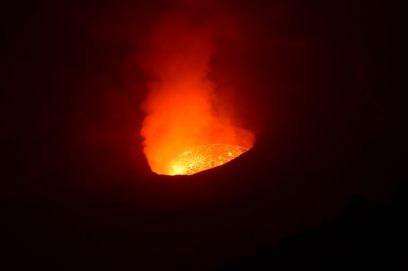 Journey to the centre of the earth.