Your Guide to Sightseeing (Surviving) in Goma.

The Congolese who live here are tough. They’ve seen it all – volcanic eruptions, war, poverty. You can still find volcanic rubble littering portions of the city, and the constant presence of UN soldiers, trucks and helicopters is a reminder that conflict simmers nearby. Your presence as an outsider with a relatively cushy life is tolerated, but don’t expect to be welcomed.

Perhaps the first thing you’ll notice about Congo is the extraordinary difference between the poor masses and the wealthy few. This lack of a middle class has many effects on daily life, including a complete lack of taxis.

This means that in order to get to your hotel, or anywhere in Goma, you will have to use a moto-taxi, otherwise known as speeding around on the back of a motor bike without a helmet. Like most slightly dangerous things, you get used to it.

The Second Effect of a Non-Existent Middle Class is the Absence of Decent Budget Hotels.

Hotels range from slightly expensive to eye-gougingly expensive. The cheapest option of “Hotel des Grands Lacs” happens to be the worst $40 per night I’ve ever spent. Forget functional plumbing, instead hotel policy was to provide a bucket of water every morning to bathe and flush the toilet. 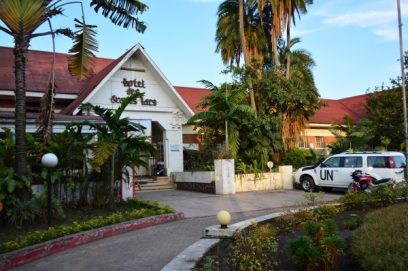 It looks so nice on the outside, shame about everything else…

Electricity is generally not included – power seems to work in some of the building some of the time. On the plus side the restaurant is decent, and I see they’ve listed themselves on booking.com since last year, which is probably more convenient than booking via a conversation in French.

Little to say, you’ll need some money to pay your over-priced hotel bill. It’s a good idea to bring a fistful of dollars with you in varying denominations (as noted above, one dollar bills are particularly useful.) Dollars are happily accepted instead of Congolese francs pretty much everywhere you go.

Meanwhile, if you find yourself without sufficient cash, prepare yourself for an epic quest to find a functioning ATM. We must have visited at least five before we struck gold.

Two (or Three at a Stretch) Unmissable Things to do in Goma. 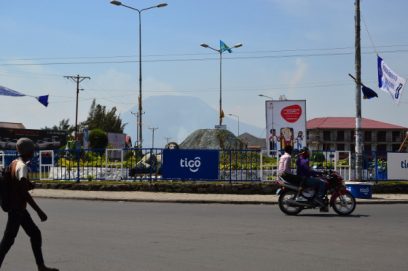 Nyiragongo volcano: looming over Goma like a shadow of doom.

Many tourists arrive, sleep one night in Goma and then go straight to the park the next morning. However, I think it’s worth scheduling a day to explore this unique disaster zone. Apart from just soaking up the pervasive atmosphere of hardship and endurance, you should check out the golden “chukudu” statue – showing off the quintessential two wheeled, wooden contraption used to trasport goods around East Congo.

A great tribute to the Congolese Everyman.

There’s also a market just off one of the main streets where you can buy all sorts of tribal souvenirs that feel and smell remarkably genuine. Just handling these objects leaves you in awe of cultural traditions kept secret in deepest, darkest Congo.

OK so between a statue, a market, and maybe a stroll on the banks of lake Kivu, there isn’t that much to do in Goma. But, I still feel you’re missing out on a key part of understanding Congo if you don’t spend a full day getting to know Goma! 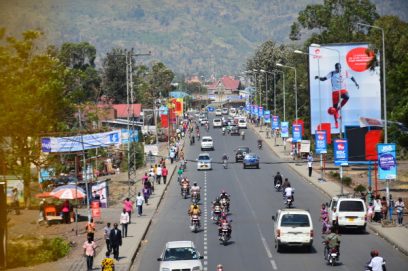 A tarmacked street in Goma – progress!