You are Approaching the Congolese Border: Welcome to Hell.

At first everything went smoothly. The petite barriere is a 5 minute walk away from the bus station, and we easily followed the road to the well organised Rwandan customs office. Inside there was barely anyone else asking for exit stamps to go to DRC, meanwhile there was a long, snaking queue of people waiting to cross the border to Rwanda. 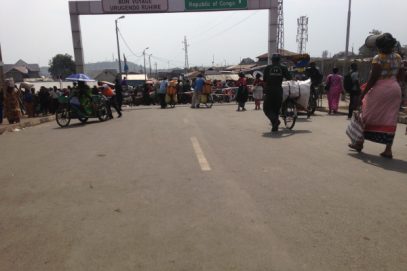 Once on the other side, the paved road abruptly ended marking the end of economic progress. Ahead of us stretched the Congo: a landscape of gravel, shanty housing, barbed wire, burning trash and a throng of people bustling at the border. At that moment it was tempting to turn around and head straight back to pleasant Rwanda. Instead, we took a deep breath and pushed our way into the crowd.

We had barely taken two steps before an armed guard stopped us – obvious white foreigners that we were – and asked for our visas. We showed him our passports and confirmation email from Virunga park, to which he muttered “ça ne marche pas”.

He took us to a crumbly shed that contained the Congolese custom officials, and directed us to a large lady sitting at the back of the shed who seemed to run the show. Constantly fanning herself, she looked through our documents and told us in English that this wasn’t enough and that we needed to contact the park to get them to bring more. Until then, we weren’t going to be allowed through. All we could do was sit in the corner of the shed, wait and despair. 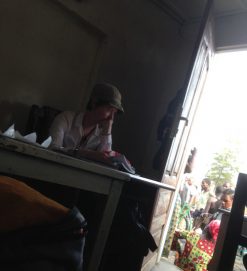 Me, despairing in the customs shed.

Is this the Moment Where we Need to Pay a Bribe?

Till this day, I’m still not quite sure what went wrong here. When we booked our permits for the park, we received a confirmation email saying effectively “if you don’t hear from us, it means everything is fine with the visa, so you don’t need to contact us.”

At the time I felt the email was light on documentation, but from that sentence I thought all must be well and this is just how they do it in DRC. Reading posts from others, apparently we were supposed to have received a follow-up email after a week or so with a scanned fax from Kinshasa to confirm the visa. If you don’t receive this, ignore the “don’t contact us” email and follow-up with the park in advance to check they’ve sent you everything.

Back in the shed, we called the park via my Kenyan SIM card, but the line was dreadful and I barely got the message across before I ran out of credit. An hour later and still no sign of the park officials. A little desperate, I asked the customs lady if we could use a phone, and she responded unhelpfully that she didn’t understand English (despite conversing fluently with us before). Thankfully, I speak a passing amount of French to communicate the question to her in her preferred language, to which she replied she didn’t have credit. Not knowing if this would cause offence, I produced a dollar from my pocket.

Little did I Know, a Single Dollar can Work Wonders in Congo.

The customs lady pocketed the dollar and became suddenly convivial enough to pass me her phone. I made contact again with the park for another confused, barely intelligible conversation. Another hour passed, and still no sign of the park officials. I asked to use the customs lady’s phone again, to which she muttered excuses until I gave her another dollar. Turned out the park official had been waiting for us at the grande barriere – where most tourists cross – but would now come to find us at the petite barriere. 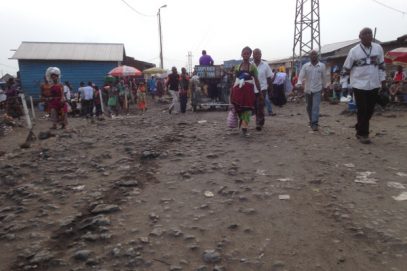 The other side of the border. On second thoughts take me back to Rwanda…

Just as it was getting dark, and we were about to abandon hope and head back to Rwanda, our saviour appeared in the form of Ellie – a Congolese guy with an American accent and epic dreadlocks.

He negotiated our visas with the customs boss-lady, and we were finally released from the shed and into the wilds of Congo.

Ellie told us that most tourists use the grande barriere as it’s less crowded, there is a paved road on both sides and the staff are far more tourist-friendly. The moral of our border crossing horror story is to avoid the temptation to just walk to the god-forsaken petite barriere, and instead get in a taxi to the grande barriere for an all around more legit experience.