Let’s get Down to What Everyone Wants to Know. How Dangerous Really is it to Visit the Congo?

Well, I think this depends largely on when and where you go. Crossing overland through the eastern provinces (including North and South Kivu) is an absolute no-no. You’d be crossing territory controlled by various militia factions, leaving yourself vulnerable to being robbed, kidnapped, murdered, or a combination of the three.

However, visiting Virunga park does not require you to cross the eastern territories. The park is located approximately 10km from Goma, a city just on the border with Rwanda. So, you’re not so much crossing through the east, rather dipping your toe in it.

We were happy to have this guy along with us for the trip.

So, How Dangerous is it to Dip Your Toes in the East?

As soon as you’re picked up from Goma, you’ll be accompanied by guards with guns at all times to ensure you’re not an east target. Rest assured that park staff take security seriously – they have to in order to stand any chance of changing the violent image of DRC – and the park would not be open if there was any trace of armed groups within the boundaries.

I’d say you’re most at risk left to your own devices in Goma – the seat of the UN’s mission in Eastern Congo. Trucks of blue helmeted soldiers and circling helicopters are a common sight in Goma, which I found a comforting sign of law and order. Unfortunately, the presence of UN forces doesn’t mean the city is immune from attack. In November 2012, after months of skirmishes, the rebel group M23 seized Goma. When they arrived in the city, the UN peacekeepers put up no resistance and fled – an embarrassing failure for the UN’s largest mission. It took the government combined with UN forces only 11 days to force the rebels to withdraw from Goma, but it demonstrates how a militia can deal a surprise blow and catch out a naïve tourist. 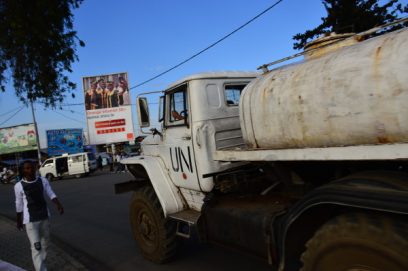 One of the many UN vehicles we spotted.

President Kabila is not a fan of the UN mission – instead perceiving the peacekeepers as a threat to his own authority – and wants them to leave as soon as possible. From the view point of someone who’s not a dictator caught in a power struggle, this seems rash even more so in view of recent events. Because, though I would like to say that since 2013 (when M23 surrendered) the area is on an upward trajectory, according to many observers this is just not the case.

And This is Where the Second Element Becomes Important: the Timing of Your Visit.

I made my trip to Virunga back in August 2015. By Congo standards, this was during a relative lull in rebel activity, and at the time the British Foreign Office website rated Goma as orange (“advised against all but essential travel”) surrounded by a sea of red for the rest of the east (“just don’t”). 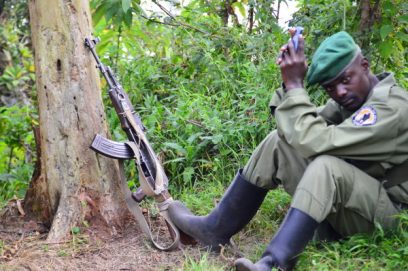 Taking a break with a Kalashnikov and a smart phone.

Since then, though there have been no attacks on Goma itself, stability seems to be again slipping away. Firstly, Kabila’s unwillingness to act in a way fitting with the D of DRC (his mandate ended in 2016, yet he refuses to call elections) has led to waves of unruly protests and brutal crack downs by police. At the time of writing (January 2018), hundreds of protesters had been detained – mainly in Kinshasa, but also in Goma – with several shot dead by police. Accordingly, on the FCO’s website during 2017, Goma’s orange blob turned red.

Such unrest plays into the hands of the rebels. In December 2017, an Islamist militant group ambushed a UN base and killed 15 peacekeepers, wounding another 50. This is the worst blow against a UN mission for some decades and took place 200km or so north of Goma.

All Very Interesting, but is it Safe Enough for me to Go???

All of the above political context considered, the situation seems to remain just stable enough that if you pop across the border to visit the park, you’ll likely be fine. That said, the situation seems to be deteriorating, so keep an eye on the local news in the run up to your visit – if there’s a flurry of attacks or riotous protests in Goma be prepared to abandon. Likewise, listen to the advice of your foreign ministry – I’ve found the British foreign office to provide realistic and helpful advice, and if they marked Goma as red I would think twice.

Let’s agree that your chances of being caught up in armed conflict is reasonably low (providing you don’t go on a jolly across Kivu). There’s another aspect that you should mentally prepare yourself for, namely that the DRC has one of the lowest GDP per capita in the world. This means that you, as a relatively wealthy tourist, are a beacon for petty crime. 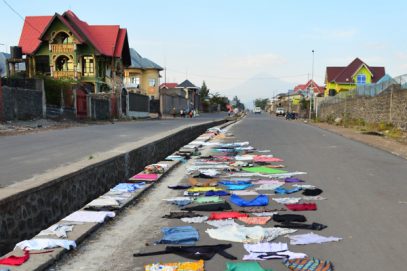 The local dryer. We’re not sure who lived in those houses, but there’s unfriendly razor wire on the walls.

Now, I personally didn’t have any problems with this, and I don’t mean to tarnish the Congolese, but I think you should go in prepared. My friend and I spent a pleasant day exploring the main streets of Goma, and the locals were mostly bemused by our presence. Still, when we approached the shore of lake Kivu to find a large group of locals washing their clothes, we soon felt that our presence was distinctly unwanted, and so headed off elsewhere. Perhaps we had this impression due to all the nicer buildings in town being surrounded by high walls and razor wire. Still, tread carefully, use your common sense and walk away if you feel a bad vibe. Do as you would do elsewhere in Africa: never walk alone even in the day and don’t go out after dark.

It goes without saying, the DRC is not a solo female traveller friendly destination. Bring a friend, preferably an intimidating looking man.

Oh, and just to note that the Nyiragongo volcano erupted in 2002, the stream of lava destroying part of Goma. Also, lake Kivu itself will one day explode, creating a deadly gas cloud to finish off the battle-scarred inhabitants of Goma.

Other than all that, you’ll be fine!